So you think this is big?

While it has been a little break over the summer on this blog, I have nevertheless been able to make a few updates related to the geological time color palettes (see this link for the original post). I have added the GTS2004 palettes (epochs and ages) and also the SEPM95 timescale. The color palettes (or *.cpt files) are designed for use with the Generic Mapping Tools (GMT) but can also be loaded in GPlates. On cpt-city, other formats are also available:

The gradients on cpt-city are usually available in each of the following file formats:

Both palettes are still incomplete and require the extension back in geological time or adding eons or epochs. You can find the files on my BitBucket repository (https://bitbucket.org/chhei/gmt-cpts/). Any contribution to extend the individual files or add new timescales (or formats such as for QGIS) will be greatly appreciated!

My paper on the evolution of the South Atlantic rift is now online in the open discussion of the new open-access journal of the EGU “Solid Earth“.  From submission (05. Jan 2013) to the manuscript being online for the discussion and sent out for  review, it took 11 days (the paper appeared online 16. Jan). We had similar experiences with a paper on the GPlates Information Model and Markup language in  Geoscientific Instrumentation, Methods and Data Systems (GI), another open-access journal of the EGU.

The format of the publication still somehow feels a bit awkward as all documents are only available as PDFs, meaning that one has to download the files instead of being able to take a first instant glance at the paper and figures on a simple webpage in HTML. Downloading such a PDF article and supplements has so far been not too fast altough the journal homepage FAQ say:

To ensure continuous online accessibility of SE and SED, the website contents are updated daily on several independent internet servers at different locations throughout the world (mirror sites).

I think  it would also be of benefit to be able to browse through the reviews and comments of papers without the necessity of downloading PDFs, similar to discussions and comments on major news websites. I guess this is done for the reason of archival but I couldn’t find any clear statement on the EGU or journal website on why this particular form of PDF and only HTML abstract has been chosen. The speed of publication, the arXiv-Style pre-publication (ie Discussion) availability of the research, favorable author rights, and making the reviews available online certainly is very promising step forward for peer-reviewed geoscience.

Here’s the abstract of the South Atlantic paper:

The South Atlantic rift basin evolved as branch of a large Jurassic-Cretaceous intraplate rift zone between the African and South American plates during the final breakup of western Gondwana. While the relative motions between South America and Africa for post-breakup times are well resolved, many issues pertaining to the fit reconstruction and particular the relation between kinematics and lithosphere dynamics during pre-breakup remain unclear in currently published plate models. We have compiled and assimilated data from these intraplated rifts and constructed a revised plate kinematic model for the pre-breakup evolution of the South Atlantic. Based on structural restoration of the conjugate South Atlantic margins and intracontinental rift basins in Africa and South America, we achieve a tight fit reconstruction which eliminates the need for previously inferred large intracontinental shear zones, in particular in Patagonian South America. By quantitatively accounting for crustal deformation in the Central and West African rift zone, we have been able to indirectly construct the kinematic history of the pre-breakup evolution of the conjugate West African-Brazilian margins. Our model suggests a causal link between changes in extension direction and velocity during continental extension and the generation of marginal structures such as the enigmatic Pre-salt sag basin and the São Paulo High. We model an initial E–W directed extension between South America and Africa (fixed in present-day position) at very low extensional velocities until Upper Hauterivian times (≈126 Ma) when rift activity along in the equatorial Atlantic domain started to increase significantly. During this initial ≈17 Myr-long stretching episode the Pre-salt basin width on the conjugate Brazilian and West African margins is generated. An intermediate stage between 126.57 Ma and Base Aptian is characterised by strain localisation, rapid lithospheric weakening in the equatorial Atlantic domain, resulting in both progressively increasing extensional velocities as well as a significant rotation of the extension direction to NE–SW. From Base Aptian onwards diachronous lithospheric breakup occurred along the central South Atlantic rift, first in the Sergipe-Alagoas/Rio Muni margin segment in the northernmost South Atlantic. Final breakup between South America and Africa occurred in the conjugate Santos–Benguela margin segment at around 113 Ma and in the Equatorial Atlantic domain between the Ghanaian Ridge and the Piauí-Ceará margin at 103 Ma. We conclude that such a multi-velocity, multi-directional rift history exerts primary control on the evolution of this conjugate passive margins systems and can explain the first order tectonic structures along the South Atlantic and possibly other passive margins.

Nice to see that one can still rely on Windows to come up with the occasional blue screen of death. Something reliable in the ever changing world… 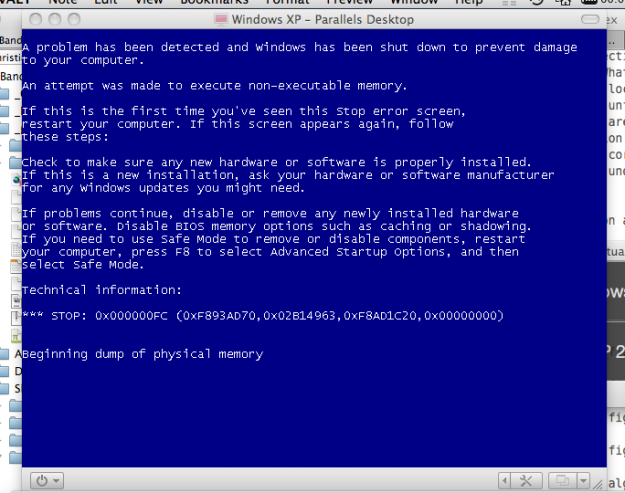 Welcome to Windows! The blue screen of death even works in Parallels VM on Mac…

The content (images, animations and text) of this blog are licensed under a Creative Commons Attribution-NonCommercial-ShareAlike 4.0 International License unless stated otherwise. If you would like to use content in a commercial setting, please get in touch using the contact form on the About page.