The TectonicWaters blog is slowly migrating to the PaleoEarthLabs main website. Please check there more more up to date entries. – See you there!

A new paper is out in Nature Communications – a study by Fabien Leprieur and co-authors (including me) on how plate tectonics influences the biodiversity dynamics of tropical reefs. Previously published paleo-shoreline estimates (see data on Github and Heine et al paper) have were used as base to model paleo-bathymetry and time-dependent spatial diversification patterns of tropical marine reefs – here’s the abstract:

The Cretaceous breakup of Gondwana strongly modified the global distribution of shallow tropical seas reshaping the geographic configuration of marine basins. However, the links between tropical reef availability, plate tectonic processes and marine biodiversity distribution patterns are still unknown. Here, we show that a spatial diversification model constrained by absolute plate motions for the past 140 million years predicts the emergence and movement of diversity hotspots on tropical reefs. The spatial dynamics of tropical reefs explains marine fauna diversification in the Tethyan Ocean during the Cretaceous and early Cenozoic, and identifies an eastward movement of ancestral marine lineages towards the Indo-Australian Archipelago in the Miocene. A mechanistic model based only on habitat-driven diversification and dispersal yields realistic predictions of current biodiversity patterns for both corals and fishes. As in terrestrial systems, we demonstrate that plate tectonics played a major role in driving tropical marine shallow reef biodiversity dynamics.

The paper is available as open-access on the Nature Communications website. Associated data can be downloaded from Figshare.

The Rifts III conference at the Geol Soc London in March 2016 has opened for registration. We’ve managed to put together a world-class programme for 3 exciting days of rift and rifted passive margin-related academic and industry research.

The objective of this conference series is to challenge the current understanding of rifts, rifted passive margins and their evolution given ever-improving seismic and remotely-sensed data, computational modelling and integration capabilities, new insights from field analogues, contrasting and contradicting scientific concepts as well as recent results from scientific and industry drilling campaigns.

The by-invitation-only technical program covers about 60 contributions from leading academic and industry authors over 3 days, ranging in scale from plates to reservoir, in a healthy mix of cutting edge observational and modelling studies. The keynote presentations will given by:

For more details on the conference and the provisional programme, please visit the Geol Soc website: http://www.geolsoc.org.uk/PG-Rifts-III, individual abstracts are available at: http://r3.basinatlas.org.

Together with former Ph.D. student Logan Yeo, we’ve reverse-engineered a set of global paleoshoreline compilations by Golonka et al. (2006) [1] and Smith et al. (1994) [2] and taken them back from the age of “dark data” being only published in analogue form, to fully digital versions. The paleoshoreline models are made available publicly in different formats, ready to be reconstructed with GPlates using different plate models. The data is published on the web alongside the paper (in press) in the Australian Journal of Earth Sciences (Heine, Yeo & Muller: Evaluating global paleoshoreline models for the Cretaceous and Cenozoic, Aust. J. Earth Sciences, in press) and they show the evolution of land area over time from ~150 Ma to the present according to the two different paleoshoreline estimates.

The files are available on my GitHub page here in *.gpml, *.geojson and *.shp format and can be viewed online. Unfortunately it doesn’t seem to be possible to embed the map on wordpress.com – I originally envisaged some funky webX.X embedded mapping here, but no. Instead web1.0 style links to follow for a sneak peek and some screenshots below:

The rendering through GitHub is fast and allows a quick overview about the global and regional paleoshoreline locations, allowing zooming in and panning. 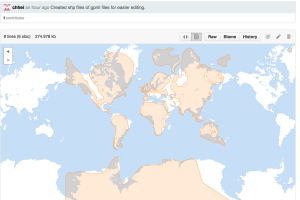 Paleoshorelines in the Golonka model for the 139-123 Ma time slice rendered from a geojson file live on GitHub. The colored area inside the polygon is equivalent to interpreted land (above sealevel) in the given time interval.

Another option to access the data is to use the version on CartoDB and interactively query and alter the data. 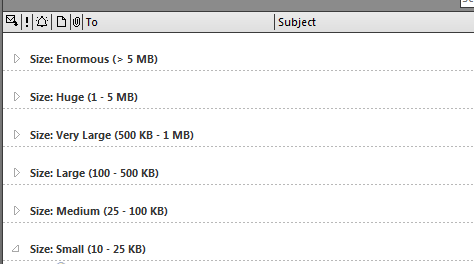 So you think this is big?

While it has been a little break over the summer on this blog, I have nevertheless been able to make a few updates related to the geological time color palettes (see this link for the original post). I have added the GTS2004 palettes (epochs and ages) and also the SEPM95 timescale. The color palettes (or *.cpt files) are designed for use with the Generic Mapping Tools (GMT) but can also be loaded in GPlates. On cpt-city, other formats are also available:

The gradients on cpt-city are usually available in each of the following file formats:

Both palettes are still incomplete and require the extension back in geological time or adding eons or epochs. You can find the files on my BitBucket repository (https://bitbucket.org/chhei/gmt-cpts/). Any contribution to extend the individual files or add new timescales (or formats such as for QGIS) will be greatly appreciated!

Yesterday, our paper on rift migration and formation of asymmetric continental margins was published in Nature Communications. Using high resolution forward numerical models we investigate the influence of extension velocities on the evolution of continental rifts to passive margins. We find a strong correlation between margin width, asymmetry and extension velocity, illustrated by the conjugate South Atlantic passive margins. Our models can explain the highly asymmetric and hyperextended passive continental margins, further, we propose that large amounts of crustal material during the rift migration phase are transferred from one side of the rift to the other, challenging conventional ideas about passive margin formation. This means that large parts of the outer margins off West Africa could actually be composed of crustal material originating from the conjugate Brazilian margin.

(a–e) Fault kinematics of the model. Active faults are shown in red and inactive faults in black. Brittle faults are indicated with solid lines, ductile shear zones with dashed lines. The wide margin is formed through rift migration and sequentially active faulting towards the future ocean. Hence, thick undisturbed pre-salt sediments pre-dating break-up are predicted by our model to be deposited in the landward part of the margin (d,e). The final crustal structure of the model reproduces the strong asymmetry (f) of the conjugate Campos Basin–Angola margins (modified after ref. 5). Note that the geosection is drawn without vertical exaggeration at the same scale as the model (scale bar in the lower right corner is 50 km long). Vertical scale is in seconds two-way travel time (TWT). Source: Brune, Heine, Perez-Gussinye & Sobolev, Nature Communications (http://www.nature.com/ncomms/2014/140606/ncomms5014/full/ncomms5014.html), licensed under a Creative Commons Attribution-NonCommercial-NoDerivs 3.0 Unported License (http://creativecommons.org/licenses/by-nc-nd/3.0/).

The GFZ Potsdam has also issued a press release related to this [in German].

Nature Comms’ Article metrics are a pretty cool indicator for immediate online impact (and I believe future citations). By now a few of the standard science news outlets have picked up the press releases (changing by the minute. Here’s a static (and human) collection of the news around the article (including some of the Altmetric links):

The content (images, animations and text) of this blog are licensed under a Creative Commons Attribution-NonCommercial-ShareAlike 4.0 International License unless stated otherwise. If you would like to use content in a commercial setting, please get in touch using the contact form on the About page.